This post contains affiliate links. If you purchase something through one of these links, I may receive a commission at no extra charge to you.

It’s time for another homeschool review post in which I give you a peak into what homeschooling looks like in our very real day-to-day life.

Summer is officially here now, though we’ve been relishing summertime activities for a good month-and-a-half already.  You might as well when you live in the south, right?

This is our third year of gardening, and it’s our best yet. We decided not to start seedlings indoors this year, since we neither have room for this nor success in hardening plants. That’s made for a much easier time just planting cucumber, lettuce, spinach, carrot, and green bean seeds directly in the soil.

We’ve also put in tomato plants and sweet potato slips. The boys helped with the process and we’ve all enjoyed harvesting the lettuce and spinach before it died off or got eaten by deer.

We now have cucumbers and tomatoes aplenty and anticipate we’ll be learning to can this summer! 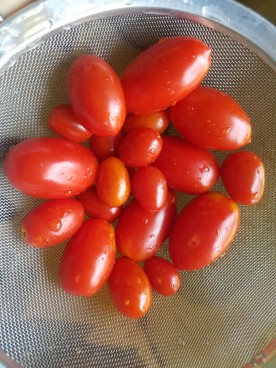 Along with regular work outside and chores inside we kept at schooling consistently through all of April and half of May. Activities always tend to pick up in the late spring, and this year has been no exception. We attended the Red Fern Festival in Tahlequah, OK;

the kids and I started attending a once-a-month Archaeology and Plant-Use History class an hour from home;

our Schole Sisters group continued meeting once a month—twice at a park and once for swimming this quarter; there was our homeschool group’s curriculum share, where I got to take a peak at other people’s favorite curriculum and win a few items to use next year; I helped coach a group of little girls at a local running clinic, which culminated with a 5K in mid-May; and Nathaniel and I were once again in charge of our homeschool group’s Field Day event, which also took place in mid-May, meaning the time leading up to it (basically this whole period I’m reflecting on) had its fair share of planning and delegating going on. 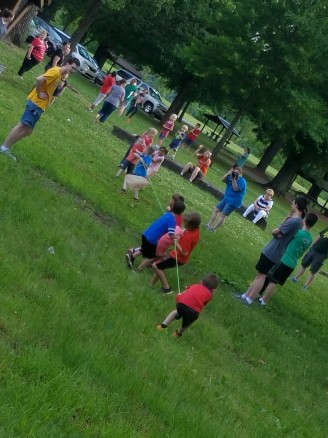 After Field Day, I needed a break!

I tried crunching numbers to see what kind of break I could justify while at the same time wondering about scheduling and planning for the coming year. After working over several ideas I’d seen on interval planning, my husband suggested we start counting out weeks from January (to keep things simple), and then I can take off a certain amount of time every eight-week period. Doing the math that way, I could see that we’d been pretty faithful through the beginning of 2018, despite quite a bit of sickness. Based on the paradigm we came up with I had 14 days to play around with!

I immediately took ten days off at the end of May. 😊

We kicked off schooling again in June with a morning of blueberry picking and an afternoon of easing back into our regular lessons. The next day we decided to throw Vacation Bible School in the mix! It is summer, after all. 😉 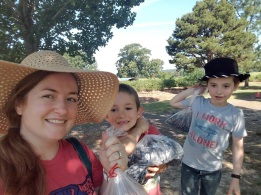 Along with the paradigm shift my husband and I came to, we also firmly decided that we would now school year-round. The schedule we’re working from will give ample time off on a regular basis, and the eight-week terms are fixed on the calendar, so that I can plan material for us to cover in that definite chunk of time. Having had a very unpredictable schedule in the past, this is such a relief to me! I’ll share more about how we’ve got this set up in another post…soon!

For now we’re continuing on in Right Start Math Levels B and C, First Language Lessons 1 and 2, McGuffey readers, Story of the World volume 2, and lots of good books. I have also introduced a new way to narrate—the boys have been retelling what they’ve read with their Lego minifigures. Suffice it to say, this is a big hit.

Christopher Robin (the astronaut) is up in a tree looking down at Pooh and saying, “Silly old bear!”

We recently finished reading Pilgrim’s Progress in Morning Time and have now moved on to Archimedes and the Door of Science.  Admittedly, this is a bit beyond my kids, but they were interested, so we’re giving it a go. We’ve also started going through a Health text book that I snagged for free at a curriculum sale. It’s been a good springboard for discussing a topic that we haven’t directly addressed at all yet—and it’s been a good, simple refresher for me on the basics of healthy food and exercise habits.

Over the past few months of family bedtime read-alouds we finished both Swiss Family Robinson and The Phantom Tollbooth. The latter was definitely our favorite of the two. We just began reading The Lion, the Witch, and the Wardrobe, thus arriving at a major childhood milestone: entering into Narnia for the first time.

Our Prodigies Music lessons are back in the afternoon again, especially since this season we’re needing more time outside in the mornings given the heat we encounter later in the day. In addition to the progression of music lessons with singing and bells, we’re now also starting Recorder Prodigies!

Where we’ve sometimes struggled to get to these wonderful lessons (among other lovely things like art and nature study) after lunch, I recently set up afternoon activity checklists for my kids so that they don’t ask me 4 billion times a day if they can play with Legos yet. Now they have to make sure they’ve done several other activities first.

This has been a win on so many levels.

They still love their Legos, but they’re also enjoying a broader variety of fun things now that I don’t let them just automatically default to their favorite interlocking brick system when I can’t think of what else to tell them to do. I’ll post more on this little sanity-saving tweak again soon!

Some of the other activities we’ve enjoyed this quarter have been watching a variety of flowers come up in our wildflower patch, dog sitting, building swings, watching a string quartet concert and a magic show, canoeing and kayaking, keeping track of the different birds we see each season, attending several other live music events in our community, and most recently swimming lessons. 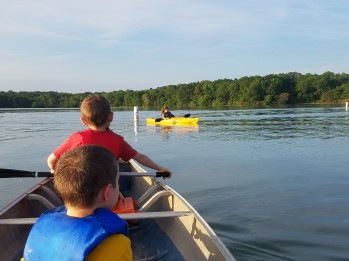 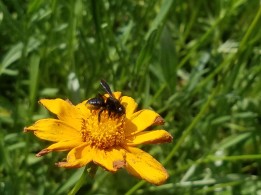 We also caught a luna moth caterpillar last week and it promptly hid itself away in a lettuce leaf and began spinning its silken sleeping bag. We’re eagerly awaiting the change.

Shadows in the Sun

While we’ve had many bright, fun outings and adventures in the past few months, there’s also been a shadow cast upon our days: a shadow of grief.

I wrote last time about how we gave our dog away to friends in February and dealt with sickness and an impending job change in March. Those were trying times in their own right, but things have gotten a bit heavier since.  In April, my in-laws’ dog Freckles, regarded by all in the family as the best dog in the world, died. As we told the boys and all shared tears, they remarked that this was worse than giving Luther away.  At least they knew there was a possibility of seeing Luther again. They understood that Freckles was gone.

Fast forward to the end of May, and we received news that my grandfather, my PopPop, died at home in his recliner. He was 95 years old and his heart just stopped. It was his time. The boys were precious as they tried to take this in, each in their own way. One burst into tears immediately, the other sat quietly as his lip began to quiver. They loved playing games with their Great PopPop. And they knew this was a bigger deal than a dog dying. They knew it would hurt for longer.

And it has. Partly due to the nature of losing a loved one, and partly due to the fact that the Celebration of Life and military burial were scheduled to occur three weeks later, in mid-June.

Grief is compounded when it is shared. Not in a bad way, it just is. Especially when you finally get to mourn with those who are most deeply affected by the loss. And so we grieved in our own way for three weeks as we waited for our trip down to Texas.

When we finally arrived it was a joy to be with so much of my family—it truly was a good time. But we also grieved together, and that was good, too, but hard. The boys got to pass out programs at the Celebration of Life, looking simultaneously like little gentlemen and silly boys. I know they prompted a lot of smiles as guests arrived. 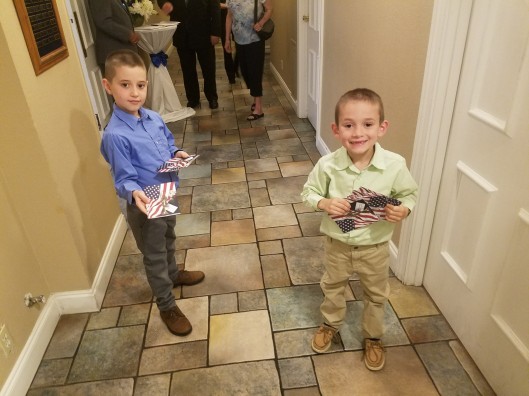 What does any of this have to do with homeschooling?

And no, I’m not referring to the “learning experience” of getting to see a National Cemetery and witnessing the giving of military honors, as though I’d try to reduce something so momentous to the level of a field trip.

If the goal of education is character formation and ordering the affections–learning to care about what is worthy of our care–these times of growing and grieving together are at the core of the curriculum. A curriculum we didn’t choose, mind you, but one we follow nonetheless.

I can see God’s hand in our lives preparing my boys for the new and difficult experiences they have faced so far in 2018. And I can see how He has been building us up as parents so that we can gently lead our children through hard times.

I marveled that the boys were wrestling with the loss of dogs in Old Yeller and Where the Red Fern Grows prior to experiencing those same emotions in real life. And the loss of beloved animals paved the way for grasping and bearing the loss of a dearly-loved great-grandfather. All the while, Nathaniel and I have gotten lots of practice not only at grieving ourselves, but of walking with others through grief—and especially with our children. It’s new territory for us, as well.

This has everything to do with homeschooling because our schooling has everything to do with living out this life together with our children until we launch them into whatever may come when they are grown. The literature they read isn’t just for practicing literacy. It’s helping their little hearts and minds prepare for real-world challenges. The time at home with us isn’t just so that we can shield them from harm or bad influences. It’s an opportunity for us to walk with them in these formative years, guiding them and encouraging them as they learn to navigate the sometimes turbulent waters of life.

It’s easy to get lost in the seemingly endless number of lessons we have scheduled. A man plans his way, but the Lord directs his steps. We get to spend our days in God’s classroom with the children He has given us and with the freedom to respond to the lessons He chooses.

What’s He teaching in your homeschool lately?

5 thoughts on “The Homeschool Review: Summer 2018”